Last Friday, I had the pleasure of attending the AGM of the Herbert River Museum Gallery. Congratulations to the hard working volunteers on another successful year.

The volunteers do a tremendous job in keeping the historical display of our district heritage in such a presentable and interesting manner. Good luck to the newly elected committee of President John Braithwaite, Vice President Coral Gard, Secretary/Grants Officer Janette Astorquia and Treasurer Therese Mitchell.

Works at the Ingham Botanical Gardens Memorial Cenotaph designed to provide better access have now been completed.  The works entailed concreting the entire perimeter of the column base and installation of additional hand railings. The works were designed to facilitate better and more fluent access for the elderly of our community, including our returned diggers in paying their respects at the Cenotaph.

Council acknowledges the contribution of the Federal Government Saluting Their Service Community Commemorative grant, that enabled the works to be undertaken on behalf of the RSL.

Commemorations ANZAC day will be commemorated throughout our district this year. The ANZAC Day Committee met on Tuesday 3 March 2021 and the following arrangements are in place:

The trip was made possible by financial assistance of the Queensland State Government in supporting the Herbert Grain in the Rain facilitation program. The program, a partnership between the Department of Agriculture and Fisheries and Council, is looking at means of introducing alternate cropping into our district as a method of improving our soil quality and establishment of new agricultural industries for the economic diversification of the district.

A reminder to our cane farming community that Canegrowers Herbert River will be holding its Annual General  meeting at the Noorla Bowls Club on Monday 19 April 2021 commencing at 3.00pm.

This is an opportunity for  farmers to remain abreast of the current affairs of the industry. Guest speaker at this year’s AGM will be Mr Paul Schembri, Chairman of Canegrowers Queensland.

Council has been  informed that Department of Transport and Main Roads (TMR) has approved a change to the  speed zone adjacent the entrance to Ingham Industrial Estate intersection from 100km to 80km per hour. The action arose in response to a recent petition by Council and Challands Street business owners presented to Parliament by  local member Nick Dametto.

The 80km speed zone will now commence at Pound Creek and will terminate opposite he Ingham Aerodrome. The petition was initially raised due to the perceived risk of accidents involving heavy vehicles  entering and exiting Challands Street and Martin Street in the midst of a 100km per hour speed zone.

Council is still awaiting on TMR to finalise the speed review along Herbert Street in response to Council’s request for same to be reduced from 60km to 50km per hour.

With Easter happening this weekend, I would like to wish everybody a happy and safe long weekend. As is tradition, many will take the opportunity to go camping and fishing so hopefully the weather will be kind to you all.

Remember to stock up locally for all your weekend needs as that will enable you to enter Council’s Monster Raffle draw and potentially win prizes to a combined value of $25,000.

Have a good time whatever you intend on doing. 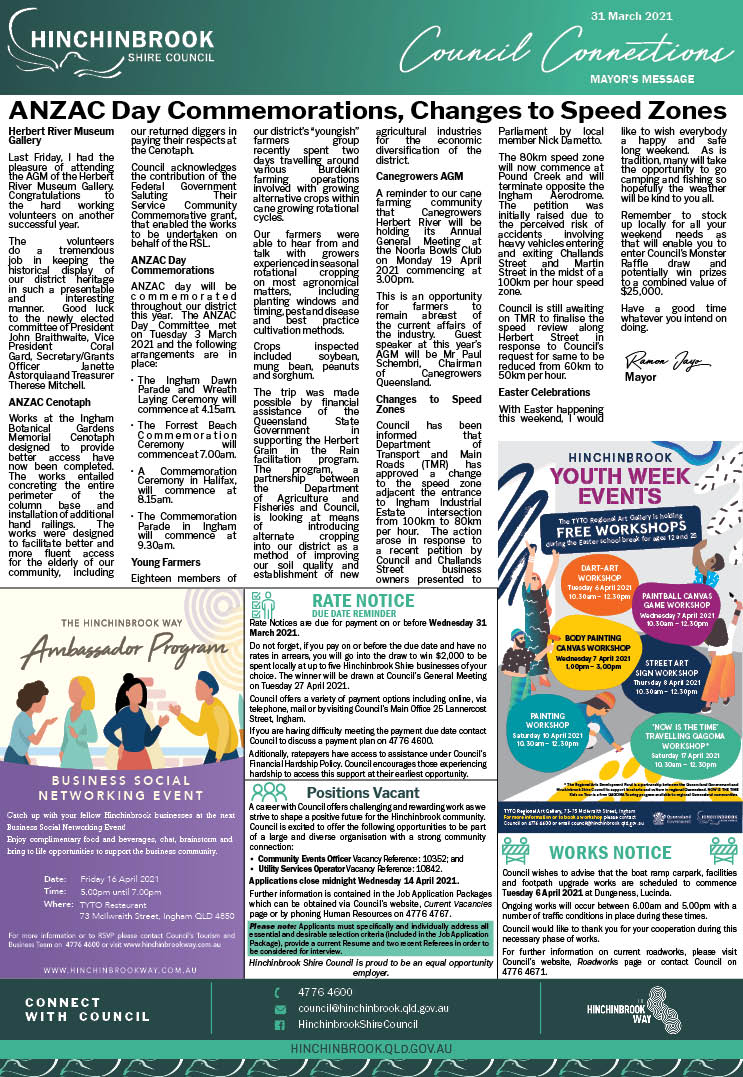