It was appalling to see and hear of the used syringes recently found dumped near Fanning Street. It is a despicable act given the real threat of injury and illness needle stick injuries could cause innocent by passers including children, and workers nearby.

Of further concern was to read comments on social media and in the Herbert River Express insinuating that the perpetrants of drug users may be “generally known”. Hopefully I am wrong, but that’s the way I interpreted the comments. If that is the case, then that information must be shared with Police.

Whilst the Police and other relevant authorities are charged with the responsibility to deal with drug users and pushers, we as a community can assist by passing on any information we may have to assist the authorities apprehend the perpetrators.

We, as a community can no longer afford to remain passive as the drug endemic seemingly grows larger everyday. We must get over the dobber mentality. The priority is taking out the people meddling in this destructive game for the protection of our children, our family, our friends and our friends children and just maybe, the lives of the drug users themselves.

As a community working together, we can make an impact to protect ourselves.

I implore you to work with the authorities if you have information to do so. Anonymity is guaranteed through systems such as Crime Stoppers – use it!

I repeat, remaining passive as a community is no longer an option. Let’s speak out together. I don’t have a problem in being called a dobber if it means one child’s life or one family’s torment is spared.

It was pleasing to see that Professor Peter Ridd recently won his case against JCU for unlawful dismissal from employment. As you may recall, Professor Ridd was sacked after questioning the quality of scientific research about the impact of climate change on the Great Barrier Reef.

It must be remembered that Professor Ridd is not arguing either way about agricultural practices being damaging to the reef or not. What he is saying is that the methodology being employed by scientists in arriving at the conclusions on which Government is relying upon as support for the need for regulation, may not be at the standard of beyond certainty.

This uncertainty over the certainty is the paramount concern for all farmers, none of whom want to hurt the reef, but whom do have a right to continue farming sustainably in the future.

In my opinion, the State Government needs to show strong leadership in addressing this uncertainty and immediately look into the quality assurance behind reef science and bring about certainty as suggested by Professor Ridd, so that we can all gain a little certainty back into our lives as neighbours to the Great Barrier Reef.

On that note, can I remind our farmers that Canegrowers led Best Management Practice (BMP) affords some surety and protection against future regulation so it is imperative that we get all our farmers accredited forthwith.

At the reef regulation hearings, you could clearly see the Government’s acknowledgement of the worthiness of BMP.

A lot has been said about the value that the Great Barrier Reef brings to Queensland jobs economy and no one denies that, but let us not forget the value that agriculture similarly brings in for Queensland. We can co exist. Let’s get it right.

Over the next few months Council will be rolling out information regarding the State Government’s Waste Levy. The Waste Levy will be introduced on 1 July 2019 and will change the way we manage waste in Queensland. Keep your eye out for information and we will keep you up to date on the changes ahead.

ANZAC Day is a day when we remember the anniversary of the landings of Australian and New Zealand soldiers at Gallipoli.

It is also the National Day of Remembrance that commemorates those brave men and women who served and died in all wars, conflicts and peace keeping operations and the contribution and suffering of all those who have served.

It is important for us all not to forget such sacrifices as such sacrifices are the reason we have such freedom in our lives today.  The selfless efforts by so many on our behalf can never be repaid in any manner or form.  We thank you for the freedom and life we now have because of you.

I believe this community should be proud of the manner in which we respect ANZAC Day and I encourage you all to participate in the parades and commemorations taking place in our region tomorrow. It is the least we can do to express our gratitude. 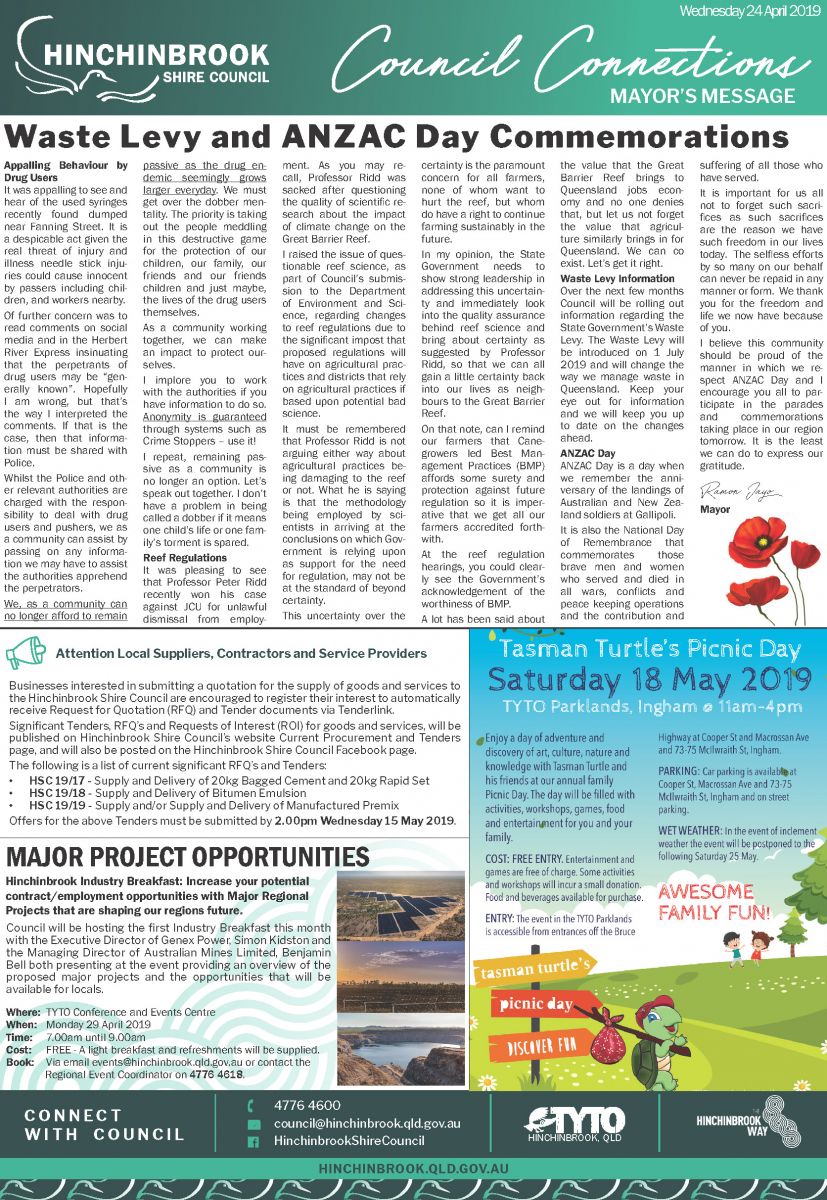