All Ex-Servicemen and Women are invited to attend the DAWN PARADE assembling at the Mafeking Tree, opposite the Police Station, Ingham at 4.15am Thursday 25 April 2019. At the conclusion of the service, all those attending are invited to the RSL Clubrooms for coffee.

6.00am - RSL Remembrance Ceremony at the New Ingham Cemetery

This ceremony, conducted by the Herbert River Sub-Branch of the RSL, will take place at the Ingham War Cemetery commencing at 6.00am.

Individuals, schools and local organisations are invited to participate in the Forrest Beach Progress Association Parade and Commemoration Ceremony. Those marching in the parade are requested to assemble, under the direction of the Parade Marshall, Warrant Officer David Willoughby Retd., in Corbett Park near the Forrest Beach SLSC, at 6.50am. The parade will move at 7.00am, march along Palm Street to the Memorial Site in Progress Park where a wreath laying ceremony will take place. Light refreshments will be provided after the ceremony.

8.15am - Halifax Parade and Commemoration Ceremony

Schools and local organisations are invited to participate in the Halifax Parade and Commemoration Ceremony. Those marching in the parade are requested to assemble at 8.10am at the Halifax State School in Victoria Terrace, under the direction of the Parade Marshall, Mr Gordon Schmierer. The parade will move at 8.15am, march along the main street of Halifax to Rupp’s corner and return to the War Memorial where a wreath laying ceremony will take place.

9.20am - Ingham Parade and Commemoration Ceremony

Schools and local organisations are invited to participate in the Ingham Anzac Day Parade and Commemoration Ceremony. All marchers taking part in the parade are requested to assemble at 9.20 am in Rotary Park, opposite the old Barra Motors building, under the direction of the Parade Marshall, Captain Felix Reitano Retd. The parade will move at 9.30 am on the northern lane of Herbert Street into Palm Terrace to the Cenotaph where the commemoration ceremony will follow, wreaths will be placed on the Cenotaph and the Last Post and Reveille sounded. The parade will then be dismissed at the completion of the service.

Business people in the Shire are encouraged to display flags which are to be flown at half-mast from 8.00am until noon and at the masthead for the remainder of the day.

The Committee respectfully suggests that persons considering the laying of Wreaths give consideration to the substitution of an Inscribed Book either instead of, or as well as, a Wreath. These books will then be presented to local Schools for inclusion in their Libraries as a lasting memento of the Ceremony.

Please see below for information regarding local road closures for ANZAC Day commemorations. To download this map please click here:

Please note that the impacted local roads will be closed and reopened for both the 4.15am Dawn Service and 9am Main Parade. 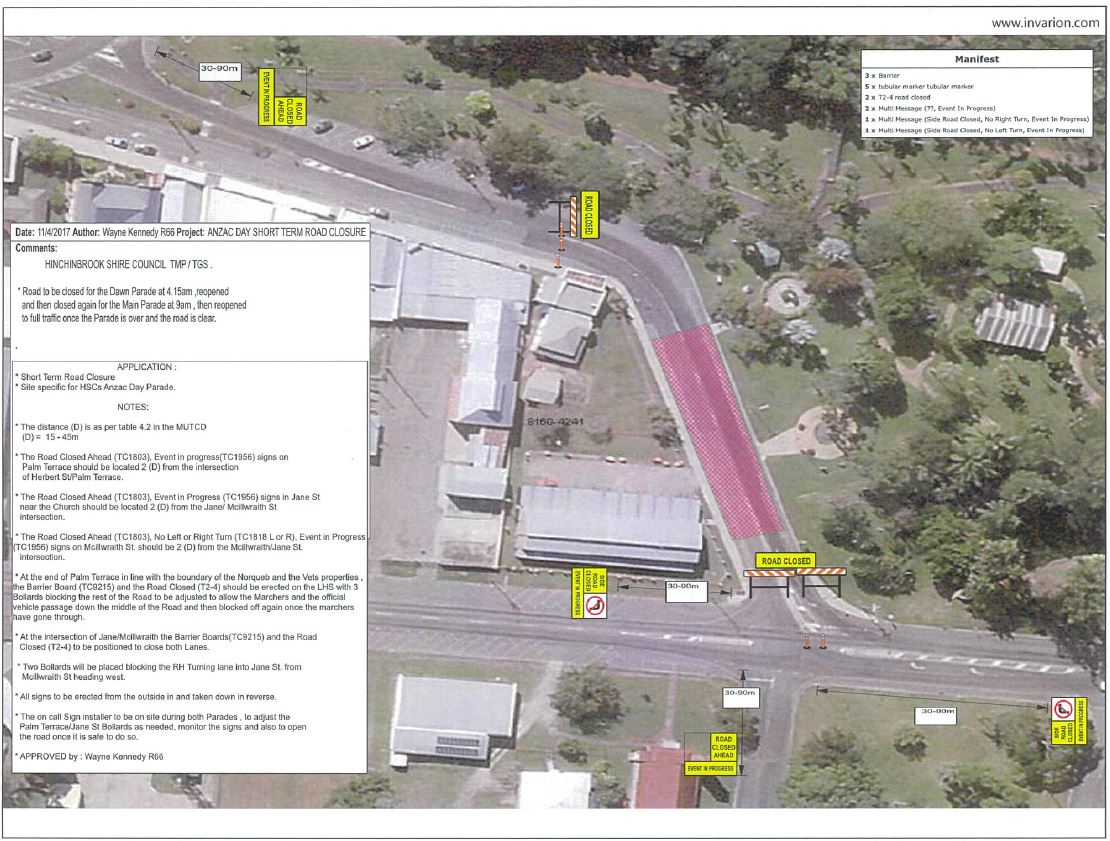